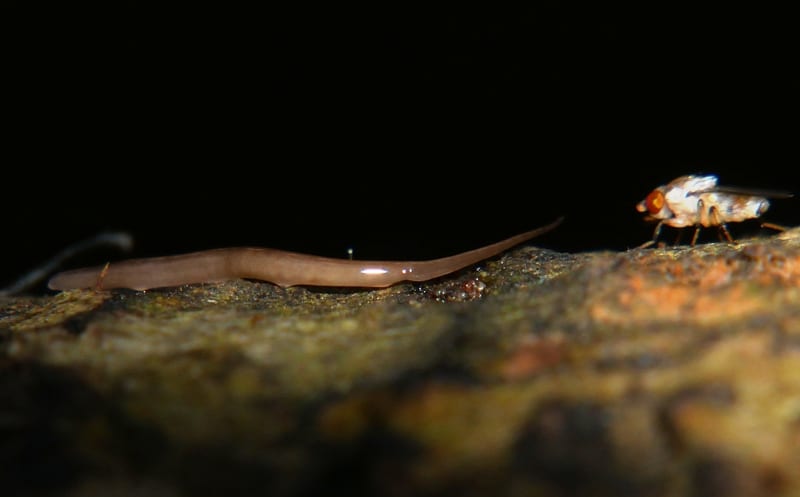 Getting to Know our Whitsunday Wildlife

Nemertean Ribbon Worms are found in the ocean but other lesser known species are common in the rainforests and moist spots in the Whitsundays. There are quite a few different terrestrial species here and they are quite diverse in colours and how they look, some long, some short, some skinny, some fat and usually less than 10cm long. Each species has its own peculiar features honed for survival, life style, their particular hunting methods and how and what each species feeds on.

Very little research has been done here on the Terrestrial Ribbon Worms and therefore few have been collected and described or given scientific names. Some species are not known to science. Ribbon worms come in a range of sizes and colours but all are very slimy and the slime is bad tasting and sometimes poisonous. They have no heart but do have an elaborate circulatory system and are very slimy. Some ribbon worm slime kills its prey and then dissolves parts of its prey which is then absorbed through the skin. Some ribbon worms are very colourful like the royal blue one that hunts and feeds on millipedes. These also hunt and feed on moth cocoons. Others possess dull colours and hunt insects such as flies and Collembola that feed on fungi. Some species have eye like sensors while others don’t, but they have a sensory system that tastes the air to detect any prey in the area. Some move fast as they slime up close and slime their prey stunning and killing then dissolving parts and feeding off that. Other species travel slowly and feed on decaying matter and fungi. Whatever their approach they are surely an interesting and unique part of our rainforest microcosm.