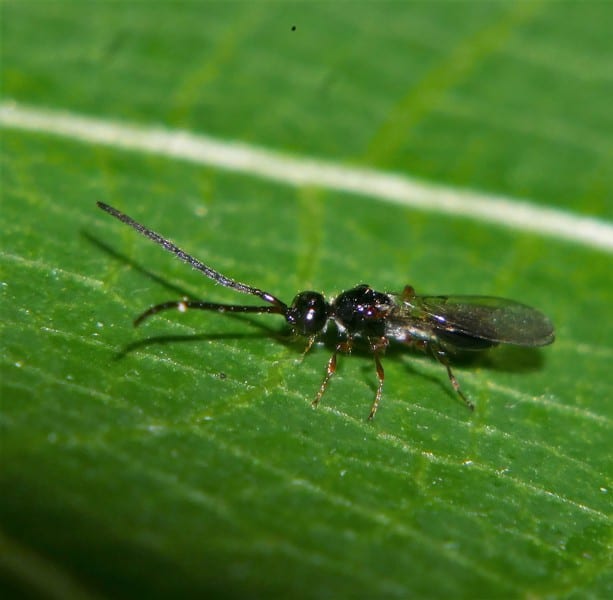 (The parasites are in control)

The term parasitoid wasp refers to a large group of hymenopteran superfamilies, mainly in the sub order Apocrita. The parasitic or parasitoid Apocrita are divided into many families representing an amazing variety of wasps with a great range in sizes and shapes and a wide range of hosts, often specific to each wasp species.

a blood sucking leach while others are internal like a fly larva eating out the host insides,

behaviour. This article is on a Parasitoid Figitidae wasp that has a Hairy Caterpillar for a

host and the wasp larvae grow inside the caterpillar.

Here at Airlie Beach we have rainforest hairy caterpillars and one is the favourite host chosen by our own undescribed species of Figitidae wasp. The hairy caterpillar here that is the favourite host is also not identified, but most likely in the Arctiidae family. The wasp larvae chemicals start working and the hairy caterpillar stops feeding and then goes in search of the end twig section on a branch. It gets rid of all leaves then goes back down the twig stem and starts an amazing feat of building a barrier fence out of its own stinging hairs. It actually plucks its stinging hairs out and carefully arranges them and glues them to the twig to form a complete barrier, ring after ring encircling the twig to protect the wasps as they go through the next stages.

After the stinging barb barrier is completed the hairy caterpillar then goes out to the dead end of the twig and anchors itself to the twig and pulls a few more stinging hairs and arranges them about itself. This is when the wasp larvae chew their way out on the underside of the hairy caterpillar and then organise themselves side by side under the bristling caterpillar body and amazingly organise themselves in order so ones head is beside the next ones tail alternating and then develop their cocoons.

THIS AMAZING feat allows them to further develop and morph into wasps and exit the cocoon so when you look at them there is sequence of head end escape lid/ tail end/ head end escape lid/ tail end.  Amazingly no escape lid is blocked by the next cocoon. Now isn’t that amazing but you might be amazed more to know that even with such an elaborate defence system of stinging hair barb barriers there is a local species of spider that has mastered the art of getting over that bristling barb barrier.   Yes, I have photographed our own local Spitting Spider Dictis striatipes of Scytodidae family rising to the occasion to cross over the hairy grub hair barrier.