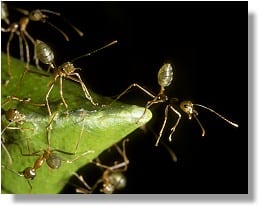 The green tree ant belongs to the ant genus Oecophylla (subfamily Formicinae) which consists of only two species; O. longinoda and O. smaragdina. Oecophylla smaragdina is found in the tropical coastal areas in Australia as far south as Rockhampton and across the coastal tropics of the Northern Territory down to Broome in West Australia. Green ants are also often referred to as weaver ants because of their ability to weave leaves together to form nests bound with silk produced by their larvae. Most of the nest construction and weaving is conducted at night with major workers weaving towards the exterior of the nests and minor workers weaving within the interior.

A mature colony of green tree ants can hold as many as 100,000 to 500,000 workers and may span as many as 12 trees and contain as many as 150 nests. Green ant colonies have one queen and a colony can live for up to eight years. Minor workers usually remain within the egg chambers of the nest tending the larvae, whereas major workers defend the colony territory, assist with the care of the queen and forage.